George Pittock capped his busiest week in cycling so far with his sixth race in nine days and a place at the fifth round of the British Cycling Youth Circuit Series at Milton Keynes on Saturday.

George was disappointed with his performance at the Springin the Park time trial at CycloPark on Friday night, where he had been hopeful of a top three finish but finished eighth, and travelled to Milton Keynes aiming to finish in the top half in only his second national race.

The event, on closed roads at the National Bowl, was very well organised by Team Milton Keynes (who have a team car and a motorhome!) and the Drops Cycling Team, a UCI registered women’s team that recently featured at the Women’s Tour of Britain, and there were rumours among the assembled U14 and U16 riders that scouts from pro teams were present.

George, as the only Thanet rider, adopted his usual warm up routine with his friends from Preston Park (Brighton), which is fast becoming his “unofficial second claim club”.

The half hour before the race saw very heavy rain, which limited the boys’ ability to use their rollers and also made the 0.9 mile circuit, with several tight turns and pinch points, quite slippery in places. The U14 Girls race, immediately before the boys, saw several crashes, and the Commissairewarned the boys on the start line to “ride safe” and that he would stop the race if there were too many crashes.

A lead car took the boys through one and a quarter laps, guiding the 80 riders safely through a 90 degree turn at the start of the second lap, before it sped off and the race was under way.

George looked comfortable in about 30th place in the main bunch until two riders touched wheels on the third lap and went down just in front of him. George braked and skidded on the wet surface but managed to get one foot down and avoided falling, but he lost his momentum and his place in the bunch.

George chased hard but, just as he rejoined the back of the bunch, it was split into two by an attack from the front. George chased again and rejoined the second group by the end of the fifth lap. He tried to stay on the wheel of his friend Tom Pughe-Morgan of Preston Park, who is of similar ability, but the chase proved expensive and George dropped back to a third group.

The six boys worked well together, with George always looking the strongest, but they were unable to bridge the gap to the second group.

They were unlucky to be lapped by the leaders on the final lap, and George was outsprinted by Billy Gilbey of VC Londres, who he knows well from his track riding, for 57thplace overall.

The race itself was won by Robert Donaldson of the Manchester based Mossley Racing Team, who won the sprint from his club mate Junior Jackson (see results below).

The start list included riders from across England, Wales, Scotland and the Isle of Man – including the daughters of Swedish pro rider and Eurosport commentator Magnus Backstedt, a stage winner at the Tour de France and Giro d’Italia and winner of Paris-Roubaix in 2004 – and this was further valuable experience for George.

George was disappointed with his performance but Stravakudos from the Preston Park boys put the smile back on his face and, as the footballers like to say, “we will put it behind us and we go again”. 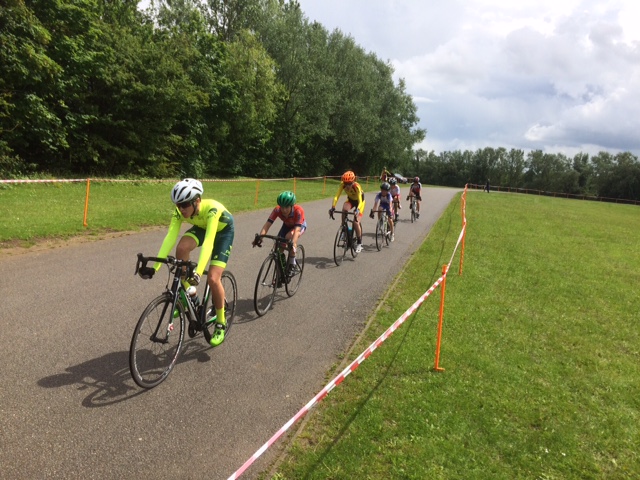