Thanet Road Club’s youth and junior riders were out in numbers at the weekend, racing in sunny but cold and windy conditions at several different venues.

Kuurne-Brussels-Kuurne (KBK) is the first of the famous Belgian “classics” and traditionally marks the start of the road racing season in North West Europe. Previous winners have included Peter Sagan and Mark Cavendish.

The junior KBK is widely considered to be the biggest and best junior race in the world and Thanet’s Toby Perry was delighted to earn a place on the start line on Sunday. It was a fantastic experience for Toby in his first UCI classified race and is a good indicator for the season ahead.

Fellow junior rider Alex Ashman secured a fine 10th place in the E/1/2/3 category at the latest round of the Full Gas Cycling Winter Circuit Series at Lee Valley VeloPark in London on Saturday. New member Tom Lowther rode his first road race since moving up from youth to junior in the opening event of the South East Road Race League at Benenden on Sunday. The pace of the category 2/3 race was tough, but again it was good experience and Tom showed great potential

Round 3 of the LVYCC Youth Races at Redbridge in London on Saturday was the last opportunity for riders to score qualifying points ahead of the first Nationals of 2018 at Torbay on Sunday 25 March and as a result the event attracted a high quality field across all age groups.

George Pittock rode his best race so far for an excellent fourth in a bumper field of 52 in the U16 Boys race. With the leader well clear, George attacked on the final ascent of Hog Hill but lost out in the bunch sprint with only 0.2 secs separating second to sixth places. Jack Hill was 41st.

Emily Heasman continued her good early season form with third place in the U16 Girls race. The top three broke away at the half way point and the podium places were never in doubt. Emily tracked the leaders all the way but did not beat the others in the finish.

Freya Cook and Tallulah Butcher had their own personal battle for fifth and sixth respectively in the U14 Girls, while Finn Dunton was 17th in the U14 Boys. Lughaidh Cook was seventh in the U12 Boys.

Lance Childs kept warm at the Wales National Velodrome in Newport. This was a track omnium event and Lance will include a report in his new blog

Finally, Thanet’s youth and junior riders continue to be inspired by former member Oliver Robinson who flew out to Calpe in Spain on Saturday for his first training camp having recently signed for Team Wiggins. 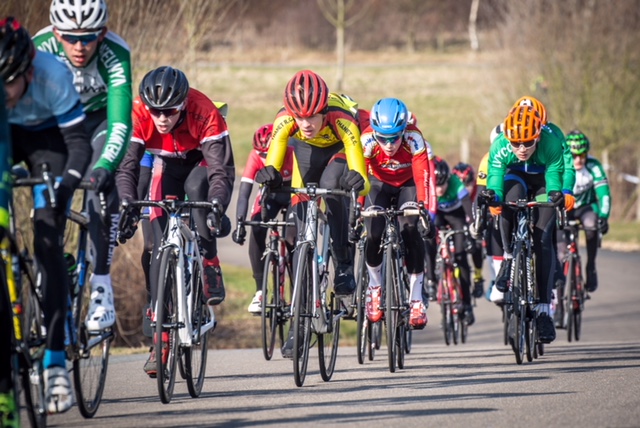