Cyclists from Thanet Road Club were competing across the country at the weekend as the Spring and Summer road racing season gets into full swing after what has seemed like a very long and hard winter.

11 riders made the trip to Lee Valley Velopark in London on Saturday for the March Hare Classic, the iconic season-opener which was originally held in 1975 and ran for almost three decades until the Eastway Cycle Circuit was closed in preparation for the construction of the 2012 Olympic Park. The March Hare returned to the site of its original home in 2017.

The U10s and U12s were first off, racing together in still chilly conditions, and Ben Hutton rode well for 6th place in the U10 Boys with Max Robinson and Lughaidh Cook just off the main bunch 9th and 12th respectively in the U12 Boys.

Tallulah Butcher and Freya Cook were closely matched as they have been recently in the U14 Girls and this time it was Tallulah who came out on top in 5th place with Freya just one place behind in 6th. Tom Hutton was unlucky to be brought down by another rider in the U14 Boys race. Tom himself was unscathed but his bike was damaged and he was unable to continue.

The U16 Boys race was fierce with several moves closed down. Jack Hill attacked bravely with one and a half laps to go but was caught and finished in the bunch in 30th place. George Pittock continued his recent good form with an excellent third place. Catherine Morrell achieved her best result so far with third in the U16 Girls race.

The best was yet to come with Thanet RC Youth Academy coach Jo Smith elated after the success of her riders and still to race herself. The women’s race was handicapped with Category 3/4 riders setting off half a lap ahead of the Elite/1/2 riders. The race was fast and Jo timed her sprint to perfection and just pipped Great Britain Cycling Team senior academy rider Abbie Dentus for the win. Abigail Langley finished in the bunch for a fine 25th place.

Also on Saturday, Dan Martin, riding for the University of Bath, was fastest in the University of Bristol CC Open 10 mile time trial in a time of 21:28; and Nic Fennell was fastest at the VTTA Kent Open 10 mile time trial at Harrietsham which was unfortunately shortened to 6.6 miles by emergency gas works. Nic’s winning time was 13:49 (see Dave Mastin report)

Tallulah Butcher and Emily Heasman made the long trip to Devon on Sunday for the Riviera Youth Classic and the first round of the British Cycling Youth Circuit Series in Torquay.

Zoe Backstedt, youngest daughter of Tour de France stage winner and 2004 Paris-Roubaix winner Magnus Backstedt, won the U14 Girls race by more than three minutes, but Thanet’s Tallulah can be very satisfied with 26th place at her first national and after racing in London the day before.

Emily, still recovering from a bout of tonsillitis and also at her first national, was 36th in the U16 Girls.

The Wally Gimber Trophy is the longest continuously-running road race in the UK, having been held every year since 1960. Raced over seven laps of a 20km course (90 miles in total) at Bells Yew Green near Tunbridge Wells and open to Seniormale Elite, 1st and 2nd category riders only, it is the first top-classified race of the year and is often described as the UK’s own Spring Classic. Past winners have included Sir Bradley Wiggins and former Thanet RC member Oliver Robinson, now riding for Team Wiggins, achieved a superb 15th place in the best field assembled anywhere in the UK so far this year.

Hamish Reilly, a member of the British Triathlon South East Academy and training and cycle racing with Thanet RC, won bronze in the Men’s Youth category at the British Duathlon Championships at Bedford. The event comprised a 2.5kmrun/10km bike/1.25km run and Hamish clocked the fastest bike split for a total time of 27:52. 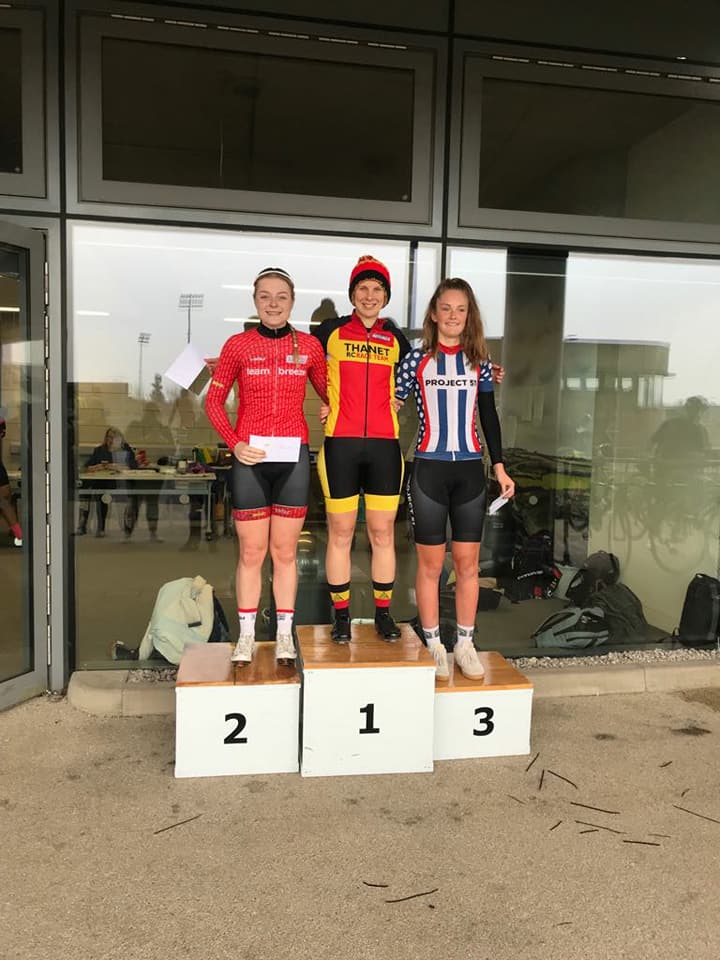