Super results from the club riders today.
Max rode a stormer at mini Paris-Roubaix. The race took in the final 3 sector of Pavé (cobbles) unclothe notorious carrefour d’arbre. Max attacked the front group on final sector and almost hung on for a win but 2nd at this race is something he will never forget (also won some flowers for Mum?)

Also some other Great results today from Tom Lowther and George Pittock at the Central, Eastern & South Eastern Road Race Championships at Layer de la Haye near Colchester in Essex. The race was 10 laps of 11.5k, so 115k in total with temperatures in the high 20s. A five rider break went on the second lap and stayed away. Tom and George tried their own break on lap 6 and were brought back, but Tom got away on lap 8 and rode solo for 6th place overall and 2nd in the SE region. George finished 3rd in the bunch sprint for 11th overall and 4th in the region. The race, and therefore the SE championships, was won by Tom Portsmouth, formerly of Velo Club Londres but now at Belgian team Spiderking Soenens. 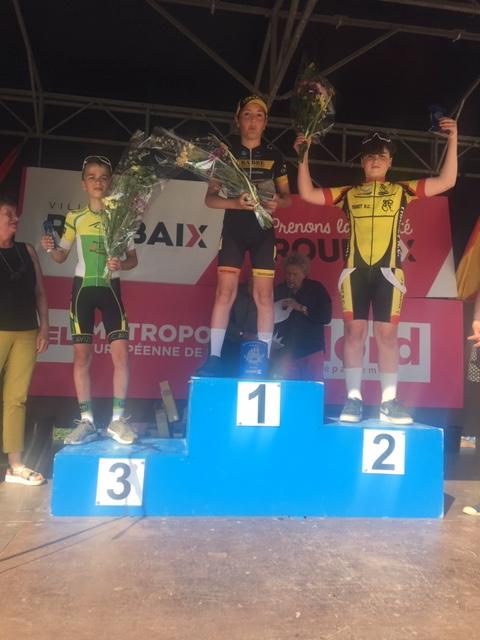