Stage 1 on Saturday was a 2.4km out and back prologue held on Morecambe Promenade. George was in 16th place at the turn but lost time coming out of the turn and his time of 3:31 left him 74th, 25 secs behind the leader but only 10 secs off the top 30.

Stage 2 on Sunday was 12 laps of a 3.3km course in Lancaster and 12 ascents and a summit finish at the infamous “Col du Daisy Bank”, a full 1km at 7%. Weather conditions were more like late November than late August with the heavy rain and strong winds described by the organisers as “biblical” and in complete contrast to the sweltering heat of the Netherlands. The pace was brutal from the start and the race split very quickly into several groups. George finished in a group of seven, the fourth group on the road, in 55th place and some 8:34 behind the stage winner who averaged 32.6kmh(20.3mph) for the 40km stage distance.

Stage 3 on Monday was different again but equally tough, 13 laps of a 4km course at Treales near Preston with no significant climbs but using narrow, sometimes single track, roads with sharp turns and loose gravel in places. Again the pace was ferocious from the start and George did well to stay in the second group for three laps before dropping back to the third group on the road and finishing 58th at 4:32 back.

“It was really tough” said George. “The climb on Stage 2 was really hard in the wet and cold and Stage 3 was just so fast. I don’t think I could have done any better on either day. 56th in the North West Youth Tour is not bad and I did OK compared to the other South East based riders who I race against every week”.

George now turns his attention to the penultimate round of the British Cycling Youth National Series at Pembrey in South Wales on Sunday 9 September. 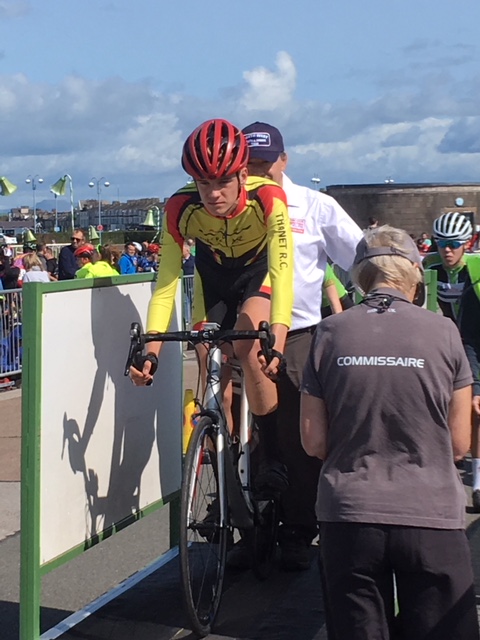