George Pittock at Road BC Regional School of Racing

George Pittock at Road BC Regional School of Racing

RSR riders are nominated by clubs and selected by a panel of coaches from the Great Britain Cycling Team (GBCT), and the purpose of RSR is to identify and develop bike riders aged 12 to 15 by providing them with high quality training under the guidance of expert GBCT coaches. Riders that show the most promise are supported further through the Apprentice and Academy schemes and on to the Podium Programme.

The three RSR sessions over the winter focussed on bunch skills, cornering, attacking and counter-attacking, how to hold position near the front of a bunch and how to time a sprint finish. On-bike coaching was supported by workshop sessions, which included goal-setting, core strength, nutrition and anti-doping.

George has gained enormously from the coaching and workshop sessions at RSR, and also from riding with and spending time with some of the very best youth riders in the country. He is the fourth Thanet RC rider to be selected in recent years and we hope there will be many more. 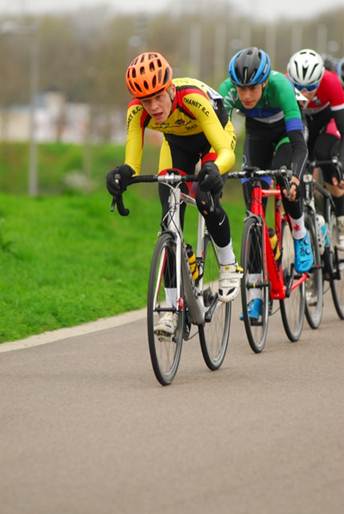 George put the mixed emotions of Saturday’s race at Lee Valley behind him with a very good ride at Redbridge yesterday (Easter Monday).

The Alan Rosner Memorial Circuit Races attracted good entries across all categories, with pro teams Novo Nordisk and Wiggins represented in the E/1/2/3 race. The U16 Boys race was a high quality line-up of 43 riders, with many familiar faces and some from further afield. After Saturday’s brave solo attack was chased down less than 50m from the line, George set himself two targets this time – to finish in the main bunch and to beat at least one of three peers who he usually measures himself against.

Oliver Knight of Team Corley Cycles was allowed to establish a 30 second lead at the half way point until Tom Portsmouth of Velo Club Londres, the winner on Saturday, chased him down to win his second race in three days.

George looked comfortable in the bunch, despite losing ground each lap on the steep descent and having to chase back, and even took a turn on the front. He came home in 21st, beating two of the three boys he had identified and, importantly for the future, finishing as fifth placed first year U16.

George slept most of the way home and was very pleased with another good day’s work!