It was a great turn out and great result for the second TT of the 2015 season from the Thanet.

The VTTA 10 at Harrietsham saw 9 riders travel out from Thanet bringing home 4 awards.

It was a bright sunny morning with a keen cross wind that provided some resistance in both directions but some reasonable times ensued.

Simon and Bill picked up fastest team on age standard.

Another fine morning and another great turn out from the Thanet with 3 teams competing in this ever popular Kent Cycling Association event.

Thanks go to Steve Airey and his team of helpers, marshals and timekeepers for another well organised, safe and enjoyable event.

It was great to see 120 riders making up 40 teams of testers on the challenging course from Romney to Ashford and back along the Ham Street bypass.

The TRC teams had mixed fortunes………..

The first TRC team off was Martin Russell, Paul Kelk and Gary Russell who were on a flyer until Paul hit a pothole on the return leg from Brenzett RAB to the finish and was catapulted into a ditch.

Paul was a bit tender after his ‘flight’ but was happy only to have scratched his carbon pedals!

2nd team off was Sebastian Dickson, Simon Henderson and Martin Glynn. Whilst not as eventful as the first team Simon and Martin had a great time trying to keep the wheel of Sebastian ‘Voeckler’ Dickson in places (Thomas Voeckler).

Things worked out to the good with the team putting in very respectable 54:39, good enough to take 2nd place overall – great ride guys!

3rd team off was Rick Perkins, Rob Milnes and Mark Palmer. For the second year in a row things did not go to plan for Mark who punctured within the first mile, leaving Rick and Rob to turn in 59:18 as two up. Third time lucky for Mark in 2016?

Michael Broadwith, Tim Bailey and Danny Axford (Artic Tacx RT) turned in the best time with an incredible 51:39 – over 29 mph average for 25 miles!

TRC teams after the final riders had come in gathered for a photo in the sun and enjoyed ‘energy cake’ supplied by Martin Glynn. 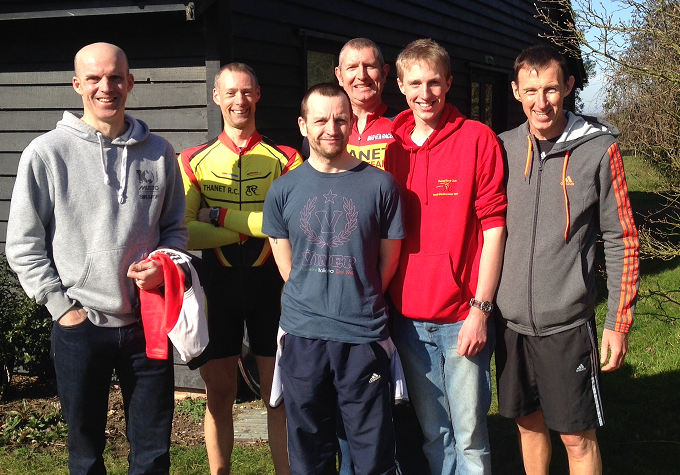