Time Trial Round Up – 5th and 6th March

Sat 5th March – VTTA 10 Q10/22 Harrietsham
The first Kent TT of the season proper brought extremely cold conditions for the riders to contend with, although conditions were bright and sunny.
Special thanks to all the officials who stood for a few hours in sub zero conditions.
There was a keen NW breeze that helped to the turn and slowed times on the return leg.
Most riders were considerably slower than 2015.

It was a good turn out and great result for the Thanet.
Simon Henderson got his name on the Mick Dansie Trophy for the third consecutive year finishing runner up to the event winner Keith Lea (Paceline RT) 21:50
Oliver Dickson just missed out on fastest junior and Nick Fennel put in a great ride with a 24:42

Sunday 6th March – KCA 3 up Team time trial Q25/12
A fine but cold morning and another great turn out from the Thanet with 4 teams competing in this ever popular Kent Cycling Association event.
Special thanks to Steve Airey and his team of helpers, marshals and timekeepers for another impeccably organised event.

Once again 120 riders making up 40 teams of testers on the challenging course from Romney to Ashford and back along the Ham Street bypass.
After a few years of trying, TRC members Sebastian Dickson, Oliver Robinson and Simon Henderson finished the day as the fastest team of 3,
KCA Team time trial champions for 2016 – well done on a great ride!

Temperature started at 3 deg C and climbed as the event unfolded but there a light NW breeze that made the leg to Ashford very challenging.
This was somewhat tempered by the new section of road surface at Ham Street ……… by 2020 KCC will have done the whole road!

The other TRC teams put in some respectable times and all riders finished incident free
The same cannot be said for getting the cars from the field at the HQ afterwards…….. have a chat with Michael and Dave next time you see them!

Sebastian, Simon and Ollie trying to warm up after the event 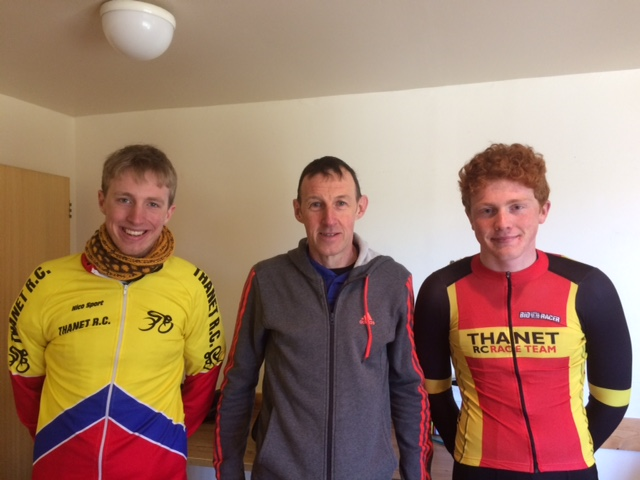