The first winner of the afternoon was Natalie Bloomer of London, who finished just ahead of Rosie Finucane of Walesand Izzy Brickell of South region in 44:40 to take the U14 Girls race and claim the first of a clean sweep of victories for the London region. Emily Heasman finished comfortably in the bunch in 22nd place and just six seconds behind.

Lance Childs was at the front going into the final two laps of the U14 Boys race, but had surrendered his position to the North West’s Cameron Pilkington as the bell rang for the final lap. But it was Billy Gilbey from London who took the win in a tight bunch finish, closely followed by Tom Sharples of Eastern region and Innes Harvey of London in second and third respectively. Lance missed out on a top ten finish with 11th place in 46:20 and Jack three seconds further back in 28th.

Thanet RC was not represented in the U16 Girls race, which was won by Kate Wootton of London who saw off the challenge of British national champion Emma Finucane in another close finish, with Eve Barrow of Eastern region and Danielle Parker from Wales finishing second and third. Kate, an Olympic Development Apprentice, is very familiar to the Thanet riders from races across the country throughout the year.

George Pittock was one of a number of riders who attacked off the front of the U16 Boys race, but the winner Finley Newmark made his move down the outside on the final straight to finish ahead of fellow Londoner Louis Bilyard, with George Mills-Keeling of the West Midlands in third. George finished 18th in the biggest field of the day just one second behind the winner.

“Once again I am so proud of our young riders” said Colin Robinson, Head Coach at Thanet RC. “All four have done very well this year and fully deserved their selections. This is the first time we have had four riders at the RideLondon Grand Prix and the first time we have been represented in three of the four races. All four races finished with sprint finishes, which points to a promising future for British cycling. It also points to a promising future for Thanet RC, because our riders are racing against the very best throughout the year and once again they have proved that they are competitive with the very best”. 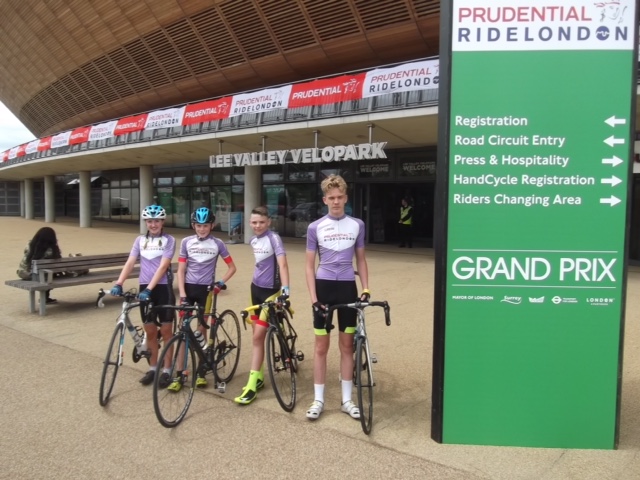