A number of our riders took part in the south east road youth championships on Sunday. Ludghigh Cook took 5th place in the under 10 boys and Freya Cook 5th in the under 12 girls. George Pittock (U14) and Alex Ashman (U16) both achieved top 10 finishes at the South East Youth Championships on a testing criterium course in Eastbourne today.

30 riders lined up for the U14 race, led out by a vintage Harley Davidson for a neutralised lap. A quartet of Preston Park (Brighton) riders controlled the race from the front, riding a chaingang with little opportunity for others to pass. George found himself at the back of a lead group of 13. He stayed with the group and worked very hard to finish 10th. Jamie Pullen of Redhill won by a tyre width from Rahul Fortescue-Talwar of Preston Park.

Alex’ U16 race had similar numbers but was very different. A VC Londres rider attacked from the gun, winning by a long way and lapping almost everybody else in the field. Alex settled into the second of two chasing groups and again worked hard for 9th place.

Well done to both boys on their first experience of criterium racing, on a tough course with temperatures in the mid 20s. Post by Colin Robinson/Phil Cook/Phil Pittock. 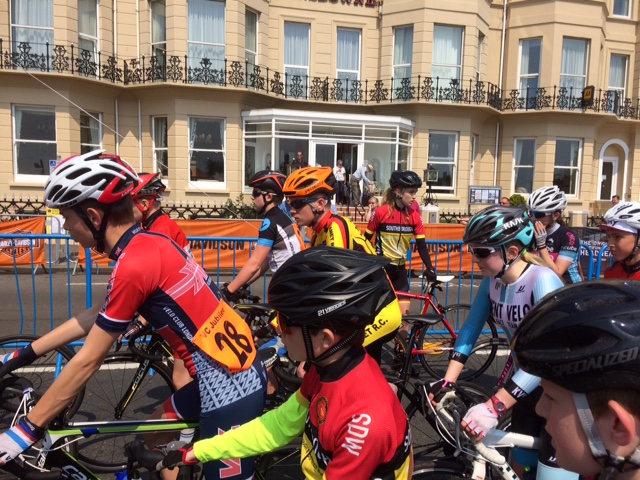