87 members attended the annual awards dinner at Smith’s Court Hotel in Cliftonville on Saturday night. Members dusted off their dickie bow ties and party dresses, the food was plentiful and well-cooked and the live band M’Larkiplayed music from Elvis Presley to The Proclaimers to Adele.

Heritage Officer David Robert, enthusiastic as ever, gave a brief summary of the 70th anniversary year before handing over to Colin Robinson who presented the Go-Ride awards for the younger riders.

The decision in 2016 to combine the Go-Ride awards with the senior awards at the same event has been well received and Tansy Martin said on Facebook “So encouraging to see such a large number of youngsters collecting their awards. Thanet RC seems to be in a strong position for the future”.

George Pittock (junior hill climb champion, Go-Ride volunteer of the year, Go-Ride rider of the year) and Lance Childs (junior road race champion, juvenile time trial championship, Pat Baxter trophy for most improved young rider) were the most prolific of the Go-Ride members but, in true Colin style, there was something for everyone and there were lots of smiling faces and proud parents.

Dave Mastin and Andy McCall took centre stage to present the senior awards in the now traditional style, with recipients coming up in turn to receive all of their awards together rather than each award separately.

Chris Fennell would have welcomed one of those trolleys that are now so familiar at circuit and track races as he collected eight awards. As Dave reminded us, Chris broke the club records for 10, 25, 50 and 100 mile time trial distances this year and several course records across the region. Younger brother Nic Fennell scooped seven awards too, which meant that the Fennell brothers won 20% of all the awards presented on the night.

Thanks go to Dave Mastin, Michael Friend, Colin Robinson and all those who checked results, calculated average speeds and decided the award winners.

Thanks also to Locks of Sandwich Cycles and Goody Aleswho supported the awards dinner, and to SP Cycles, Whites Transport Ltd and WW Martin Ltd for their sponsorship this year.

The biggest cheer of the evening, however, went to Helen Hill for organising the awards dinner and other events throughout a memorable year.

A full list of award winners is attached below. 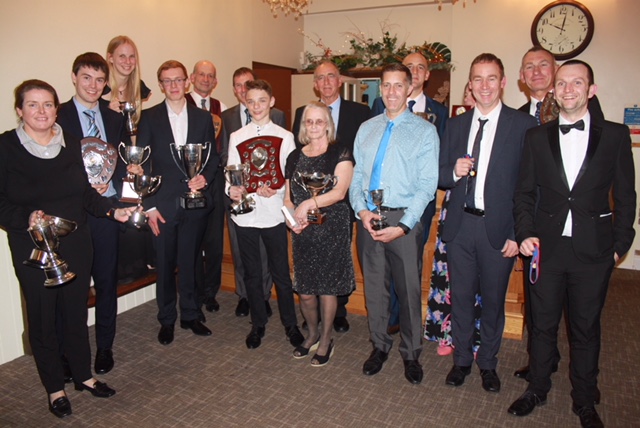